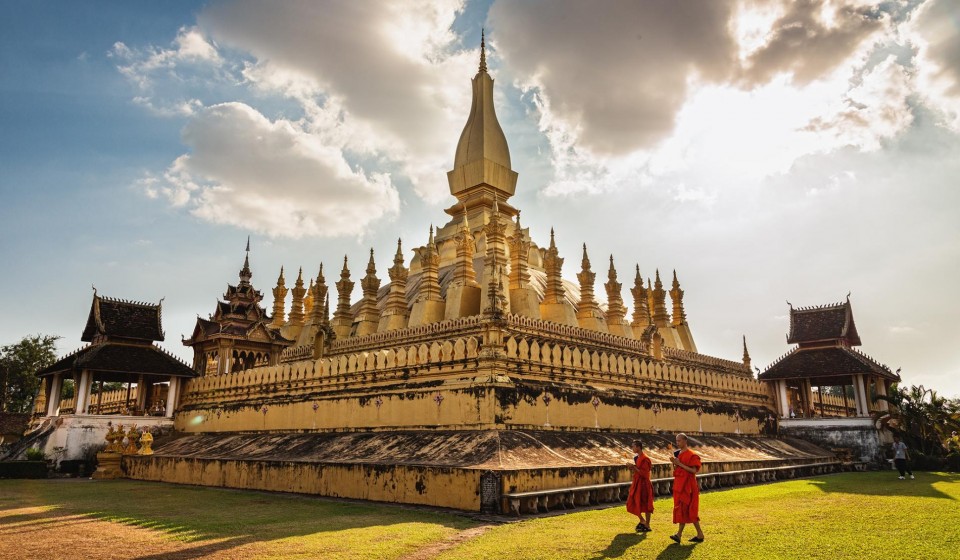 GENERAL INFORMATION ABOUT LAOS
ສະບາຍດີ
(sabaidi) !
This land-locked mountainous country is gaining a reputation as an eco-tourism destination. Its many rivers and pristine national parks are ideal for activities such as trekking, kayaking and caving diving.
While Laos does not offer a coastline or famed beaches, it does have 4,000 islands in the south, as well as the Khonephabangeng Falls, the largest waterfall in Southeast Asia.
The capital, Vientiane, is more like a big village than a crowded Asian hub and life throughout the country moves at a slow pace.
Most people come to Laos for a brief tour of Vientiane, the UNESCO World Heritage site Luang Prabang, and perhaps a brief detour to the mysterious Plain of Jars.
However, those who make the effort to explore further aﬁeld, will be well rewarded with luscious landscapes, friendly people and unique glimpses of a country that has hardly changed for over centuries.

VISA TO LAOS
LAOS VISA ON ARRIVAL
Unless you hold a passport from Japan or one of the ASEAN member states, you’llneed a visa to enter Laos. The good news is that you probably won’t need to arrange it in advance; thirty-day visas are now available on arrival at most international borders.
Visas on arrival take just a few minutes to process, cost around $35, and are available to passengers flying into Luang Prabang Airport, Pakse Airport and Wattay Airport in Vientiane. It is also possible to extend your visa for another 30 days at a cost of about USD $2 per day. Otherwise, you will be charged USD $10 per day by border authorities when you leave Laos.
Travelers will all need a passport valid for at least 6 months after they depart.

LANGUAGE
Lao, also called Laotian, is the official as well as the dominant language in Laos. Laos is home to Southeast Asia’s second largest Francophone population. The arrival of French explorers in Laos in the 19th century facilitated the spread of French. English has been threatening the dominance of French as the preferred foreign language. English features in the system of many schools in Laos, and it is increasingly being regarded as the language of global commerce.
HOLIDAYS
16th to 18th  of April Lao New Year.
CURRENCY
The Lao Kip (LAK) is the official currency of Laos. US dollars are also widely accepted in bigger cities, particularly in restaurants. It’s a good idea to arrive in Laos with some US dollars as the Lao Kip cannot be exchanged outside Laos, thus you will not be able to purchases before your arrival. Note that torn and old US dollar notes are not generally accepted in Laos. In areas located near the Thai border, the Thai currency, Baht, is also accepted.
Upon arrival, you should plan to exchange your money at a bank. The airports and hotels generally will give you a worse exchange rate. Check out a currency converter such as, www.oanda.com/currency/converter/, for the latest exchange rates.
Credit cards
Visa is the most common. Master Card and American Express are accepted at most banks in the larger towns (such as Vientiane and Luang Prabang), and in the big hotels, restaurants and souvenir shops.

SHOPPING
What to bring from Laos?
Some things you can bring from your holidays to Laos are the traditional skirt of Laos is worn by women attending ceremonies, school girls and government officials alike. The skirts are large, cylindrical tubes attached at the waste and folded over. Or you can also buy in Laos some silk and textile weaving, woven baskets, silver and gold and some  Champasak Coffee.

WHAT TO PACK FOR LAOS?
Clothing
Clothing during the hot season, January to April, bring light clothes in cotton and linen, sunglasses and a hat all year long. Sunscreen and bug repellant is also recommended.
From November to December, the cold season, it is a good idea to bring warm clothing such as sweaters and jackets for the morning and evening, and even more so if you are visiting the mountainous regions of the North.
From May to October, during the rainy season, it is best to have waterproof clothing. It is best to wear easily removable shoes or sandals when visiting the temples.
When visiting temples and people’s homes, if you sit down, avoid pointing your feet forward as this is considered offensive behaviour and try to sit in a kneeling position.
If you are not participating in any trekking tours, sandals and lightweight shoes are sufficient. If trekking is included in your itinerary, you will need trekking boots.

TRAVEL TIPS FOR LAOS
Food and Drinks
Food
What are the most popular dishes in Laos?
Lao cuisine, while not ‘discovered’ on the international cuisine scene, is quite savory and will tantalize your palate. Most similarly linked to northern Thai cuisine, Lao cuisine staples include sticky rice, padaek (a type of fermented fish paste/sauce) combined with a variety of vegetables and dipping sauces. Meats are often added only as a supplement, such as goat, duck, chicken, pork, and freshwater fish. Spices used include lemongrass, ginger, garlic, chilies, lime leaves, mint, cilantro, & shallots. Meats are often grilled or ground up into a spiced mixture. Fish and chicken based soups with noodles and vegetables are also common, along with spicy greens and salads.
Chilies are used as a condiment, but Lao cuisine also uses ginger, lemongrass, coconut, tamarind, crushed peanuts, and fish paste. Fresh river prawns and fish—including the famous, massive Mekong catfish, the world’s largest freshwater fish—are also standard fare, along with chicken, vegetables, and sticky rice.
As in Isan, larb (meat salad with shallots, lime juice, chilies, garlic, and other spices) is a staple, as are sticky rice and tam mak hu, the Lao version of green-papaya salad. Grilled chicken, pork, and duck stalls can be found in every bus station and market in the country. Northern Laos, especially Luang Prabang, is noted for its distinctive cuisine: specialties include grilled Mekong seaweed, sprinkled with sesame seeds and served with a spicy chili dip; and orlam, an eggplant-and-meat stew with bitter herbs. Sticky rice, served in bamboo baskets, is the bread and butter of Laos.
Throughout the country you’ll find some Vietnamese influences as the pho –noodle soup, served for breakfast. Laotians also consume an extra-strong coffee sweetened with condensed milk, or the ubiquitous Beerlao, a slightly sweet lager.
Drinks
Only drink purified bottle water. Bottled water is readily available and some hotels provide complimentary bottles. Carry a bottle with you throughout the day. Luxury Travel Ltd provides you fresh tissue and drinking water during touring days.

LAOS HIGHTLIGHTS
TOP CITIES IN LAOS
Vientiane
Luang Prabang
Luang Namtha
Pakse
LAOS NATIONAL PARKS
Dong Amphan. Located in the northeast of Attapeu Province, Dong Amphan is predominantly hilly, in an area of about 200,000 hectares
Dong Hua Sao
Hin Namno
Nakai-Nam Theun
Phou Khao Khouay.
TOP EXPERIENCES IN LAOS
•    Watch the sunset on the banks of the Mekong river in Vientiane
•    Traverse the lush mountains of eastern Laos
•    Try to spot gibbons and leopards in the Nam Ha Protected Area
•    Enjoy the sunset over Mekong River over a couple of Lao beers and the rough mountain of Laos and Thailand in bordering town Houey Sai
•    Relax on a leisurely boat trip Luang Sai along the Mekong River from Houey Sai to Luang Prabang. Experience traditional village life on the Mekong River.
•    Explore the mysterious Pak Ou Caves and enjoy natural walk at the Kuang Sii waterfalls and visit hill tribal villages near by
•    Take in panoramic views from the top of Phu Si Temple over Mekong River in the sunset
•    Witness monks receiving alms in the streets of Luang Prabang in early in the morning
•    Take a refreshing break to the fertile rich Boloven Plateau. Have a cup of strong lao coffee.
•    Admire beautiful Tad Fan (Taat Fan) waterfall to the east of Pakse.
•    Journey to Southern Laos’ 4000 islands and marvel at South East Asia’s biggest waterfall, Khone Phapheng