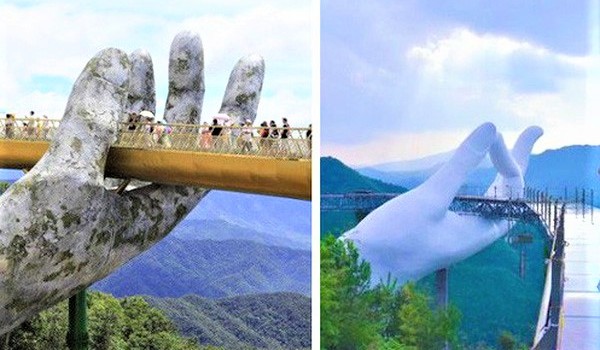 Tien Thu Bridge in Fujian Province has a glass form, supported by a giant hand rising up in the sky.

As soon as it was inaugurated, Tien Thu Bridge was awarded Guinness record as the largest Buddha hand sculpting sculpture in the world. The bridge began construction in August 2018, with a total cost of 16 million yuan (nearly 53 billion dong). The bridge is 99 m long, the Buddha’s hand is 19 m high and the glass floor. According to Sohu, this suspension bridge has the meaning of “the god’s hand supporting the rainbow”, and is inspired by a folk tale.

Tien Thu Bridge is considered by many to be Golden Bridge in Da Nang, Vietnam. Golden Bridge is 150 m long, opened from 6/2018 and is one of the top tourist attractions in Da Nang city. The bridge is located at a height of 1,400 m above sea level, on Ba Na mountain. In August 2018, the bridge was voted one of the best destinations in the world by Time magazine of America.